A delightful work. A necessary and admirable practice. 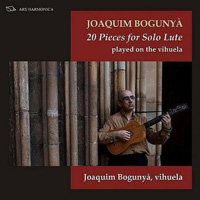 Five months ago, in the recording studio in Cardedeu, the composer and lutenist Joaquim Bogunyà recorded an album edited by Ars Harmonica; a delightful work on which he has been engaged for a long time. It is a selection of pieces (...) for the vihuela or the lute. (...)

Joaquim Bogunyà's comments on the disc, which are available only in English language, state that when he was very young, he was impressed by the music of the composer, singer and lutenist John Dowland, due to its divine sound. Here we have, then, the feeling that, thanks to this fascination with Dowland's music, the Catalan lutenist could not escape to his destiny as an artist.

Between the years 2012 and 2017, the Lute Society publishes four books of his music for Renaissance (lute) (...), one of them of songs for the lute and voice. This CD features all the pieces contained in the first book.

Bogunyà performs these works on a vihuela made by the lute maker Patrick Hopmans in 1998 in a necessary and admirable practice (...) An album that reveals the personality of a composer who feels connected to the divine sound of sixteenth century music.

With the latest news from magazine, events and showcase. Do you want to receive it?